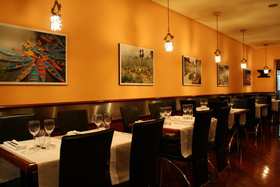 Annapurna could be translated as Goddess of the Harvests. Is the name of a series of peaks in the Himalayas, making it the tenth highest peak on earth and one of the "eight thousand". Annapurna is also the name of the goddess of food and cooking.

Some dishes: soups, vegetables, saladsrice, tandoor and all kind of currys!

An intense aroma of spices fills the halls of this restaurant.

They also serve a snack consisting in a kind of crackers with three different sauces.