Pedralbes Palace: is a museum with a permanent collection including decorative ceramic pieces, also the seat of the headquarters of the Union for the Mediterranean. 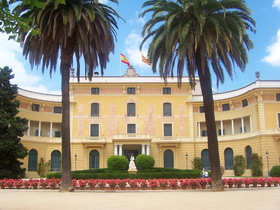 In the past it was used by the Spanish Royal family when visiting the city. Given National Historic status in 1931. Now open to the public, it has a museum with a permanent collection including decorative ceramic pieces, Catalan and Arabic pottery and works by Miró and Picasso. The gardens were designed by J.C.Forestier; Royale Mayor Palace, (13th century) used by the Counts of Barcelona and Royal family during that period. It houses the famous Tinell room (14th century) which was used by the Reyes Católicos (Catholic King and Queen) to welcome Christopher Columbus following his return from America..

The Palace has its origins in the old country house of Can Feliu, from the 17th century. The country estate was acquired in 1862 by the Count Eusebi Güell, along with the neighbouring house Can Cuyàs de la Riera, which created an extensive estate. Subsequently Count Güell gave up the house and part of the gardens to the Crown. At this point the buildings were remodelled and converted into a Royal Palace (1919-1924), designed by the architects Eusebi Bona y Francesc Nebot.
The gardens were designed by Nicolau Rubió i Tudurí in 1924, a project which placed a large number of existing trees into a decorative geometric layout. The main access to the building from Diagonal Avenue is presided by a beautiful sculpture designed by Eulàlia Fàbregas de Sentmenat, and that bears the meaningful name of Mediterrània. Meandering through the gardens one finds a fountain created by Antoni Gaudí which during recent years was completely hidden by dense vegetation. It was rediscovered at the start of the 1980s and is the star attraction of a charming corner of the garden. In the gardens of the Palace one can find pine trees, eucalyptus, magnolias, acacias, bamboos, palm trees, cypress, cedars, lime trees, ivy as well as benches made from bamboo and luminous fountains created by Carles Buïgas. Last comment
CLOSED (Nov. 2018)
Arno (23 Nov 2018 - 16:24)
After a long walk from the Fairmont hotel we were very disappointed. With no notices outside the Palau is obviously closed. A large sign post at front that might give notice has nothing on it.
Add a new comment View comments