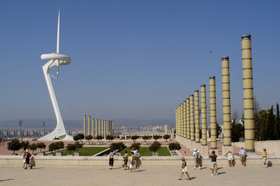 The Olympic Stadium of Barcelona was ready in 1929 but history decided something different. It is in 1992 that this stage was finally used. Meanwhile Correa, Milà, Margarit, Buixadé, Gregoretti architects of different nationalities had collaborated in its rebuilding. It can accommodate 65 000 people it is the stadium of the 2nd team of football of the city: "Espanyol".

A stadium not to be confused with the Camp Nou, the stadium where you can see FC Barcelona matches Last comment
AC\DC
~Me~ (27 May 2015 - 09:08)
I LOVE ACDC OMG I SO WANT TO GO TO CONCERT!!! but i don't know where to buy them. i think u can maybe just search up the places where they r performing and then buy them there XD! hope i helped :)
Add a new comment View comments