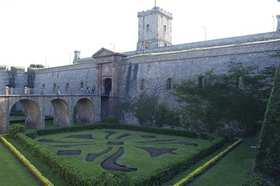 Montjuïc Castle is an imposing castle that dominates the city since 1640. It was primarily used to repress the people for two centuries. Repression of the anarchists in the XIX century and prison for the political prisoners under Franco. In 1940 Lluis Companys was executed here. He was the president of the Generalitat of Catalonia. Nowadays is the only place in the city where you can see a statue of Franco. It also shelters a military museum.

All tickets to visit "Castell de Montjuïc" at the best prices!