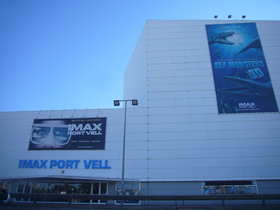 Imax Cinema in Barcelona
The amazing large-format cinema in Barcelona is called Imax, located in Port Vell. This cinema was the first Imax Integral movie theater in the world!
It has three kinds of Imax technology:
- Imax technology: a 600 m2 screen, with a 21 meter high flat screen.
- 3D technology: they use the same screen as Imax technology but you'll need to use specially polarized glasses.
- Omnimax Technology: this is the greatest wrap-around sensation! films are projected into a semispherical screen wich surrounds the viewers.

You've got to experience it!